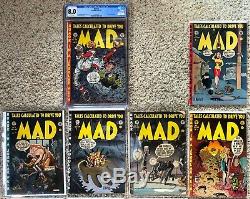 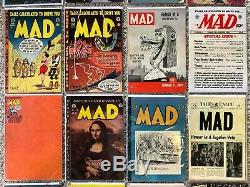 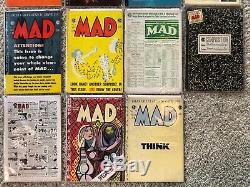 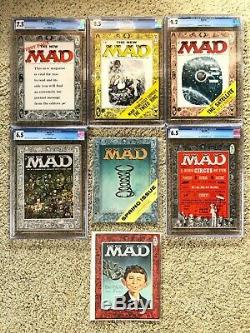 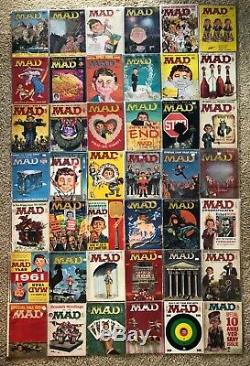 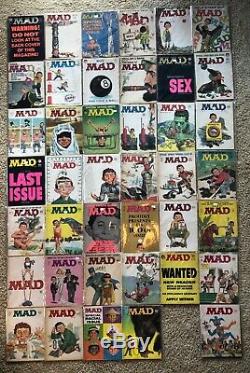 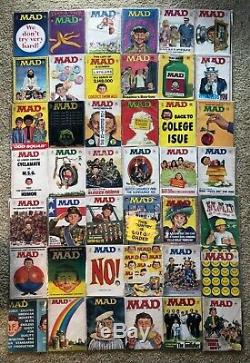 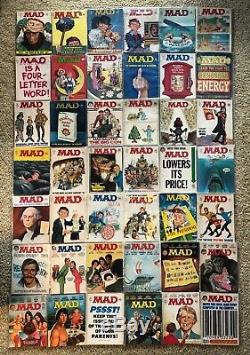 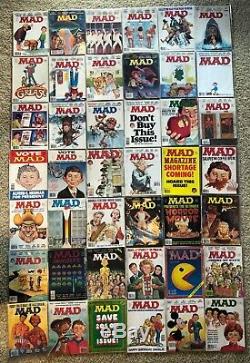 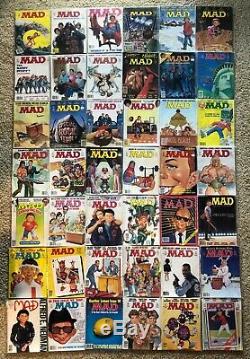 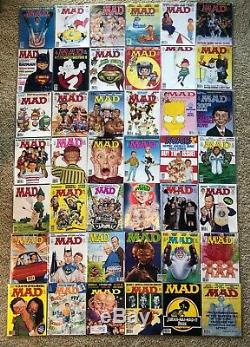 Bring home the ultimate collection of political and pop culture history. The covers alone are a veritable history lesson.

My dad and I spent time collecting these as I was a kid - in the 80s & early 90s - driving around to comic book shops and conventions throughout the midwest. But even as I - I don't want to say "outgrew" because you never outgrow MAD - but even as I went to college and found other interests, the subscription bills kept getting paid and those magazines kept on coming, all the way through #550! THE LAST OFFICIAL MAD MAGAZINE!

This LOT consists of just the regular MAD Comics/Magazines and two books. COMPLETELY MAD: A HISTORY OF THE COMIC AND MAGAZINE.

Beautifully details the history of every cover for the first "48 years, 6 months and 3 days" of the magazine with a color photo and description for each issue. Is more of a general history, but no less a necessity for the serious collector.

NO other SUPER SPECIALS, PAPERPACKS. DUPLICATE copies or any other MAD memorabilia is included. The photos themselves are arranged in chronological order, left to right descending down the seven rows, starting with the comics, then switching to magazine format w/ #24. If there is a gap between issues in some photos, it.

Represents the missing issue - which again are #s 1, 3, 113, 401 and 498... Ore close-up photos of the comics because they are obviously the oldest part of the collection and I figured a bit more detail was warranted. Also, as can be seen, a few of my issues have been GRADED by CGC. But I have read the Overstreet Guide as well the CGC's grading rules and as long as it's understood that individual grading or absolute accuracy for 550 issues is unrealistic.

S far as the overall condition of this collection, aside from the few comics/magazines that have been GRADED by CGC (which can be seen in the pics) and therefore their condition is obvious. The condition of the older half of the collection averages GOOD/VERY GOOD/FINE, with obviously some issues a little more worse for wear than others. Minor discoloration/dulling and/or fine tears/creases can be seen in some issues but I don't believe anything major. Six issues - #s 72, 74, 75, 118, 156 and 264 have their covers torn (or nearly torn) away. Two or three have pencil markings. #28 was punched through with a 3-hole punch. Probably to be expected, but starting with #86 (through about #320), about 80% of the back covers have been folded in.

Though, a good majority of the creases are hard to see. Of the issues after #320, very few should be folded in. If you see a price sticker, most of the time it's on the mylar bag, though not always. The newer half of the collection - from the 1990s onward - should be almost entirely NEAR MINT. Certainly from issue #320 onward (because that's about when I started my subscription) and especially anything beyond #350 (as they had thin cardboard protective covers at that point) the condition should be NM or NM+ with the super rare, every-so-often, occasional bent corner as it was put it its storage box.

These issues were never read. As soon as they were delivered, into the storage box they went.

Any issue I collected before my subscription was kept in a mylar bag in the box. Any inserts, gags, special gifts and even subscription cards that came with these later issues should all still be inside. Ones that came before my subscription, I can't attest to. Regarding issues that released multiple covers - about 20 I think - I only have one VARIANT COVER... And despite the photos I have with this listing, I have now REMOVED THE WHITE PROTECTIVE CARD STOCK they were delivered in. If you want to see pics of specific issues or have questions. I encourage you to reach out. But it does come AS-IS so make sure you're happy before you plunk down your cash. This is a serious collection intended for a serious collector. And the price reflects as much. Finally, I will not separate issues to sell individually so please don't ask. This collection - all 175lbs. The item "100% COMPLETE (ALMOST!) MAD MAGAZINE/COMIC LOT 545 ISSUES! BEST ON eBay" is in sale since Tuesday, April 7, 2020. This item is in the category "Collectibles\Comics\Magazines".

The seller is "dudychunk" and is located in Rutherfordton, North Carolina. This item can be shipped to United States.