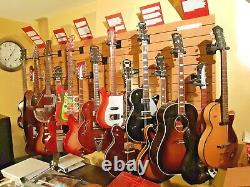 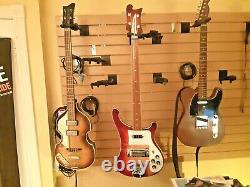 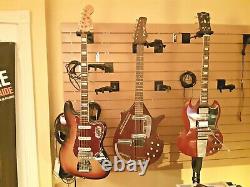 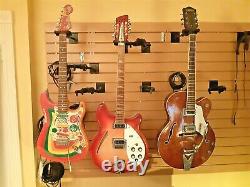 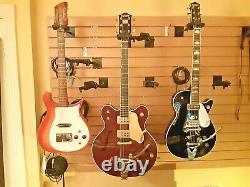 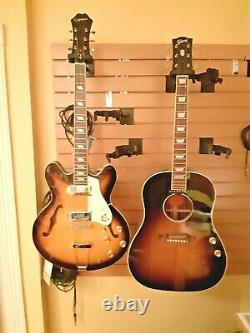 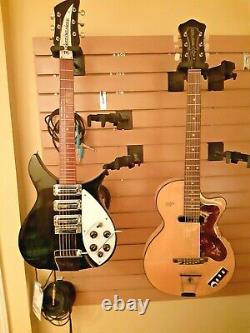 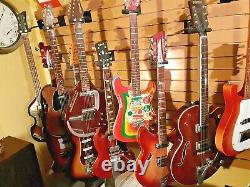 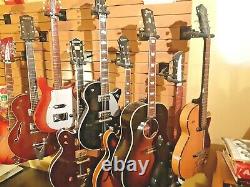 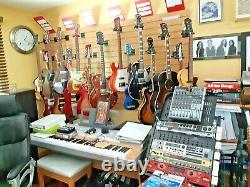 This collection of 16 guitars represents the same models of about 95% of all guitars used by the Beatles throughout their career. See Demo video of each on Youtube (as mentioned in each description). Those videos were made with no professional help of any kind. These guitars were part of a 2013/4 Beatles exposition at the Museum Pointe-à-Callière in Montréal, Québec, Canada celebrating the 50.

Anniversary of the Beatles (2) shows presented in Montréal on September 8. The value of each guitar individually. The guitars as a group. Research done by myself as a Beatles aficionado over the years to find the exact same model and configurations as used by John, Paul and George.

Pilgrimage to the NAMM show in California. Id like to thank Mr.

Andy Babiuk for his bible: Beatles Gear. All guitars are mint, in excellent condition and come with original cases, unless otherwise specified. Photos and any answers to questions will be gladly provided to serious buyers. See my intro/Presentation video on Youtube. Beatles Collection Intro from JL.

Yoko Ono to get approval from the John Lennon estate for the production of the remainder 119. Initially, Mrs Ono thought that this was Sir Pauls guitar as shown in the famous photo of the early edition of the group where Sir John chose to pose with his new Rickenbacker 325 and Sir Paul (who mostly played piano at the time) wanted an instrument in his hands. This is serial number #1 of the 120 Club 40 guitar production. These were hand-made by Master Luthier Dieter Fischer in Germany. This guitar is just like the one that Sir Johns aunt Mimi paid with a deposit of 17 pounds at the Hessys Music Shop on August 28.

1959, a day before the Quarrymen (group started by Sir John) made their first appearance at Liverpools Casbah Coffee Club. Delta with the actual instrument.

Guitar serial #1 differs from the other 119 guitar production as it has a trust rod cover. I know, I have 2 of them, the only two known to be in Canada. See my demo on Youtube! Beatles Collection: Video #1 - Hofner Club 40 from JL. Beatles gear reference: Page 30-31.

The guitar was not originally Jetglo (black). That finish was not available at Rickenbacher. It was introduced later on as Sir John had painted his black to fit the suits that Brian Epstein had the Beatles wear. Its identical to Sir Johns second Rickenbacker 325 guitar that he got from a Rickenbacker representative in 1964 as the Beatles went on a Miami vacation. This model is known as the Miami model.

Story has it that teenager from the States would call the Rickenbacker distributor in Germany to get the same guitar (as they thought that Rickenbacker would have to be made in Germany, due to the German name). That proved to be a challenge for Rickenbacker in the States as they didnt offer the black (Jetglo) finish at the time.

None known, except year of manufacture. Beatles Collection: Video #2 - Rickenbacker 325 from JL.

Sir John guitar was given various paint jobs over the year from this original Sunburst finish to the 1969 Bed-in in Montreal, Canada. None known to the original sunburst finish changed later to the final Bed-in finish.

Sir George had bought a guitar just like this one in 1961 from a sailor who brought it back from the States. He had bought it from Mannys Guitar Shop in NYC. Beatles Collection: Video #5 - Gretsch Duo Jet from JL.

That first guitar was famously known to have been destroyed as it fell from the top of the minivan they were using coming back from Hamburg and touring England. Sir George acquired a second one with the more usable flip-up mutes. Comes with the original back cover to prevent buckle rash. Beatles Collection: Video #6 - Gretsch Country Gentleman from JL.

This is a 1959 Rickenbacker 425 guitar. Bit of scuffs, photos available. Sir George bought one just like this one in 1963 while visiting his sister in the USA.

So this one is an earlier model. Note the extremely rare Rickenbacker metal nameplate. As bought by Sir George initially. Beatles Collection: Video #7 - Rickenbacker 425 from JL. Beatles gear reference: Page 94-95.

Sir George played a guitar just like this one on multiple occasions. It was also played by a number of guitarists of that era, including Gerry from Gerry and the Pacemakers, the guitarist from the Animals, etc. Beatles Collection: Video #8 - 1963 Gretsch Tennessean from JL. Beatles gear reference: Page 106-107.

His first one was a bit different but his second one was just like this one. It has a mono output and a Rick-O-Sound output (Stereo). None known (from the second one he got).

Guitar #10: 2010 American Fender Rocky Guitar. This guitar was commissioned by myself and was painted by an american artist on a 2010 American Stratocaster Fender guitar. In 1965, Sir John and Sir George acquired a pair of American made Stratocaster which were painted Sonic Blue. In 1967 Sir George painted his with some childrens school material to what was then known as the Rocky guitar.

None known except for year of manufacture. Beatles Collection: Video #10 - Rocky Guitar from JL.

Sir George acquired the guitar in 1966 and it was used on Revolver. This guitar is a Gibson Custom Shop replica of Sir Georges 1964 Gibson SG in every way. Beatles Collection: Video #11 - Gibson Les Paul SG from JL. Beatles gear reference: Page 178-179. Guitar #12: Coral Sitar Guitar as seen in Help!

Coral Sitars were made originally between 1967 and 1969. 2 very little dings on body. Sir John and Sir George were given two of the first Coral Sitars made by Danelectro. Sir George got his first contact with the Coral Sitar sound in a restaurant scene where an indian guitarist was laying it. It is not known if Sir George played a Coral Sitar on a Beatles recording as he was getting to know the Indian traditions at the time and most probably used a real sitar, as taught by Ravi Shankar.

This 1974 Fender VI Bass is the exact same model that Sir John and Sir George played when Sir Paul was on the piano or on guitar. Story has it that both were not comfortable playing on the fret scale of a normal bass so they used this one which is a compromise between a guitar scale and a bass scale.

Remember that John played on a Rickenbacker Jetglo 325 which was a ¾ guitar scale. 9 / 10 as it has some small varnish dinks on the very bottom, where the strap button is. Comes with original case (special configuration due to the size/scale of the instrument). It plays like a guitar (riffs and chords) but the strings are a whole octave below a regular guitar. Because of a lack of popularity, very few of those where ever made, especially with that configuration.

Guitar #14: 2006 Fender Telecaster Rosewood Guitar (Model 1968) (as played on top of the Apple building). In December of 1968, Fender R&D department presented Sir George with this one-of-a-kind Rosewood Telecaster. Sir George used it on what would later be the last concert of the Beatles on top of the Apple studios. Sir George was given this one of kind instrument by Fender c. 1966 which he played (through a Leslie) on top of the Apple offices on what would be the last Beatles concert. Sir George was invited by his friend Eric Clapton to come along and play in a small London club with Delaney (Bramlett) and Bonnie and friends for a few nights. One night, Sir George told Delaney that he had other engagements and wouldnt be able to play again. As a token of his gratitude, he gave the guitar to Delaney which, story has it, couldnt accept such a gift to which Sir George counter by saying that he, Delaney, had given Sir George the greatest gift of all: The joy of playing music again (which he had lost after lengthy and deep feuds with the Beatles that lead to the separation of the Group). The story continues: In 2006, Mr. Delaney who agreed to send the guitar in NY State so that Mr.

Babiuk could have Fender Custom Shop do a copy. The Fender custom shop luthiers scanned, ex-rayed and examined the guitar in every which way, found the proper rosewood and made one exactly like it. It is as close as you can get from having the actual Sir George guitar!

Sir Paul acquired his in 1965 and it replaced his Höfner 500/1 bass. His was Fireglo (like this one) but later sanded down to the natural wood, just like John did for his Casino and the Gibson J160E. Nevertheless, being a rare and most probably the last Rickenbacker fretless bass made, it has a great value on the market. Beatles Collection: Video #15 - Rickenbacker Fireglo Bass Guitar from JL. Beatles gear reference: Page 234-235.

It also features the old vertical Höfner company label. This bass was made especially for Sir Paul by Höfner Master Luthier Dieter Fischer which I had the pleasure to meet in 2013 in Bamberg, Germany at the Höfner plant.

Three of these were made: 1 was kept by Höfner, 1 was given to Sir Paul via Mr. One is part of this collection. Babiuk confirming this is available. Sir Paul uses the 1962 model but this bass is his back-up bass.

Beatles gear reference: Page 50. This is, as you would guess, a local pick-u.

My collection of vintage guitars and gear so I'm in no hurry! Check out my other items for lots of House items, Art, Silverware, Watches, Gear and Vintage Guitarssss! AMAZING Beatles collection, 16 guitars (as the FAB four)!! 1964 Fender Bassman Amp+2x12 Cabinet Fender Electric Instr!

Baldwin Grand Piano, 88 notes, 5' 10 with recording/automatic play in excellent condition! The item "In Montreal, Canada AMAZING Beatles collection, 16 guitars (as the FAB four)" is in sale since Tuesday, December 17, 2019. This item is in the category "Entertainment Memorabilia\Music Memorabilia\Rock & Pop\Artists B\Beatles\Other Beatles Memorabilia". The seller is "514jlv001" and is located in Montreal, Quebec. This item can't be shipped, the buyer must pick up the item.