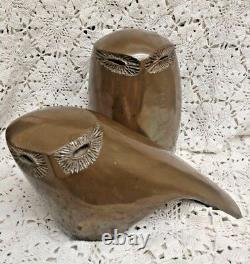 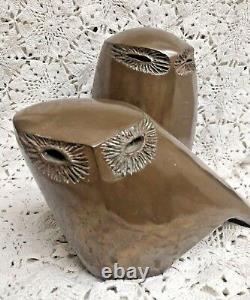 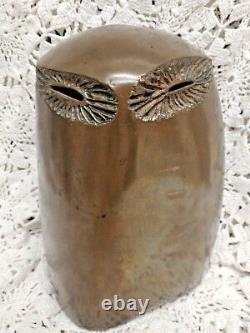 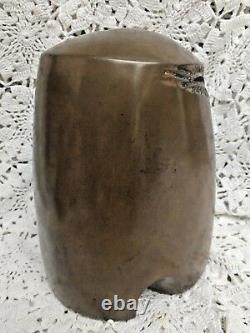 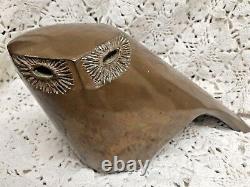 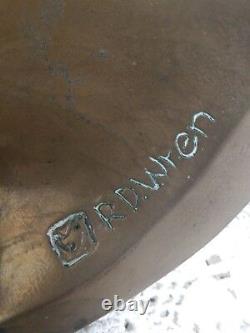 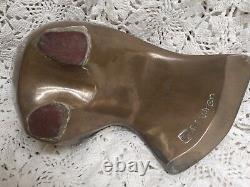 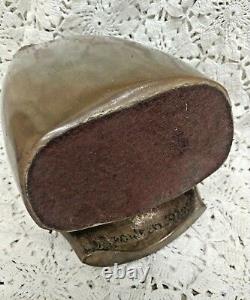 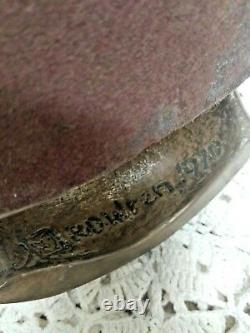 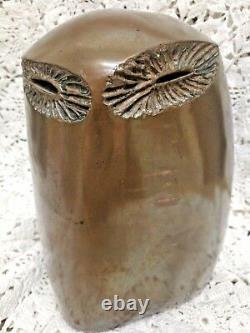 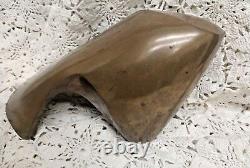 Stunning example of mid century modern bronze owl pottery at it's very best. This is the original two piece set by famous English pottery artist Rosemary Wren. Mama owl and her baby owlet. The baby owlet nests in the rounded body of her mother.

The baby is smaller but looks larger in my photos. Set is heavy and quite large. Mama owl has a few scuff marks on front that I tried to capture with my camera. These scuffs are age related and in my opinion do not take away from the beauty of the set. Rosemary Wren is best known for her pottery birds, especially a set of bronze mid century owls as spectacular as these two. Each piece is individually marked/ signed by the artist on the bottom. Because this is the original two piece set, and because of it's incredible condition, I personally think it's nearly museum quality. For the mid century pottery and/or owl collector it simply doesn't get much better than this. Her art is currently increasing in value. About the artist- read below!

Rosemary also proudly served her country in WW2. And, she personally trained under some of the best potters in Europe.

Sadly, she passed away in 2016. Rosemary Wren was born in Oxshott, Surrey, daughter of the potters Henry and Denise Wren. And is best known as a maker. Of animal and bird figures. She attended Guildford School of Art where she was taught pottery by Helen Pincombe.

And sculpture by Willi Soukop. She joined her mother at the Oxshott pottery where she had a studio workshop, ran courses and made pots to her mothers designs as well as slipware, plant pots and thrown and modeled figures. She learnt to make hollow hand-built animal figures from Francine Delpierre. In 1957, she held her first exhibition at Heals showing slipware, thrown pots for flowers and hand-built and slipcast animal figures. With her mother she helped to redevelop traditional techniques including saltglaze and raku.

In 1970 Peter Crotty came to work at the Oxshott Pottery and soon after became her partner. He took on the decorating, glazing and firing of the animal figures. There are over a hundred animal and bird figures in their repertoire. Her system of working is first to draw from life and then handbuild the form using pinching and coiling.

When they moved to Devon (1978) and then to Strathpeffer, Scotland, (1990) the Oxshott archive and pottery went with them. In the 1990s Rosemary Wren suffered eye damage but she continues to make animal and bird figures using a more intuitive touching process. She has written extensively on ceramics; in the 1990s she completed a text on the Knox Guild that.

Co-founded in the second decade of the 20th century. She was a founder member of the Craftsmen Potters Association (1956) and was its first Chairperson.

She was a gold medallist at the Prague International (1962). Her work is in many public collections and exhibitions. The item "Mid Century Modern Bronze Owl Sculpture Set by Rosemary Wren Pottery" is in sale since Friday, April 19, 2019. This item is in the category "Art\Art Sculptures". The seller is "danasdeals2021" and is located in Menifee, California. This item can be shipped to United States.