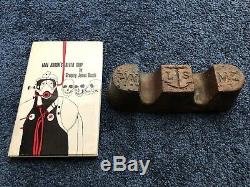 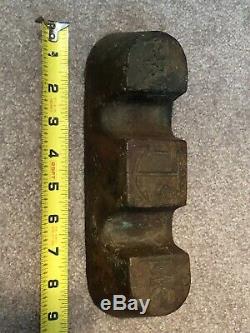 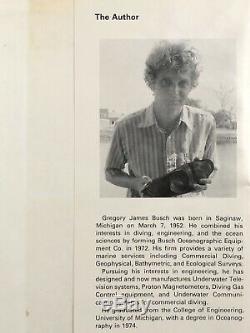 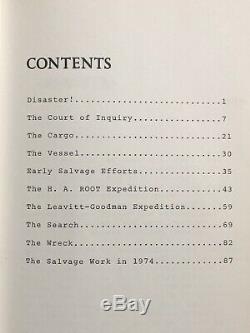 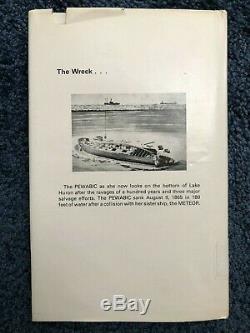 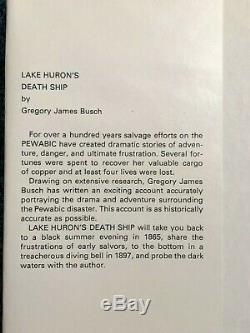 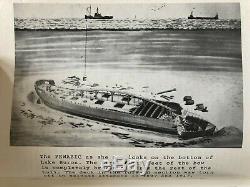 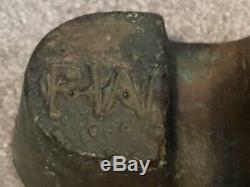 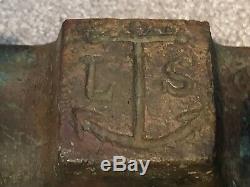 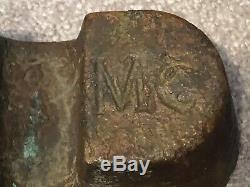 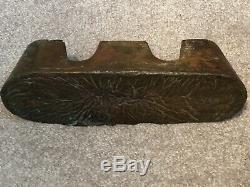 Up for sale is an increasingly rare and hard to find civil war era copper ingot from Upper Michigan's Pewabic Copper Mine. Please read below for details regarding this ingot and the shipwreck history surrounding it.

In addition to the Pewabic Ingot is a copy of the extremely rare autobiography by Gregory James Busch. This was a former library book from Saugatuck-Douglas District Library, Saugatuck, Michigan.

In over 30 years of collecting North American mining antiquities, we have never before see a copy of this book come up for sale. This book details Busch's life work, his formation of the Busch Oceanographic Equipment Company, the Pewabic Shipwreck salvage operations as well as a very detailed historic summary of all previous diving and salvage attempts that had been made on the shipwreck prior to his successful salvage operation in the 1970s. This book is an absolute "must have" for the serious Michigan Copper Country antiques collector. We consider this book an absolute historical treasure and have priced this small collection according to its rarity and importance to early American hard rock mining history. PEWABIC COPPER INGOT - Copper ingot from Michigan's Upper Peninsula; ingot weighs approximately 12 pounds, 9 1/2 L x 3 W x 2 1/2 H in. Stamped with the PW designation for Pewabic, LTS for the Lake Superior Transit Company, and MC for Mining Company. The Pewabic Mine is an underground copper mine located north of Hancock, MI, and just north of the Quincy Mine on Michigans Upper Peninsula. In 1853 the Pewabic Mining Company was formed by eastern capitalists who controlled a tract of ground on the north end of the Quincy property. For the first two years, work concentrated on opening prehistoric mining pits that traced an apparent amygdaloid bed that was subsequently named the Pewabic lode. The first, and only, shaft Pewabic drove was driven on an incline following this bed.

The shaft was located approximately 1,900 ft. North of the Quincy #2 shaft. The mineralization on the Pewabic lode at the Pewabic Mine was not as rich as it was on Quincy's property. The Pewabic Mining Company, when originally organized, had a thirty-year charter from the state of Michigan.

Company officials allowed the charter to lapse in 1883, and in 1884 the mine ceased operations. In 1891, Quincy Mining Co. This was the start of expansion and consolidation for the Quincy Mining Company that would eventually lead to control of the entire Pewabic lode. A total of approximately 27 million lbs.

Of refined copper was produced between 1855 and 1884 by the Pewabic Mining Co. Part of that copper production was aboard the Civil War-era steamer Pewabic carrying a valuable cargo of copper from Michigans Keweenaw Peninsula mines on August 9, 1865. The name Pewabic for the mining company, lode and steamer is an Ojibway Indian word meaning copper or iron-bearing mineralized formation. Her cargo consisted of copper ingots from four mines Quincy Mining Co. Hancock Mine, Pewabic Mining Co. The total copper cargo approached 270 tons. In addition she was also carrying 179 tons of specular hematite (iron ore) from the Marquette area. The accident occurred about six miles off Thunder Bay Island lighthouse in Lake Huron. Pewabic was southbound from Sault Sainte Marie on her way to Detroit. The vessels were merely 20 feet apart when Pewabic veered suddenly. Meteor's bow cut deeply into Pewabic's port side, just aft of the wheelhouse.

Built in 1863 by Peck & Masters at Cleveland, Pewabic was powered by twin steam engines that turned 8-foot wooden propellers. The 200-foot vessel had a beam of 31 feet. Her oak hull was 2 feet thick and was strengthened by a wooden arch running down the centerline. Wooden propeller ships, introduced on the Great Lakes in 1841, became popular for carrying bulk cargo.

By 1850, there were more than 50 of them. Pewabic and Meteor were constructed for the Pioneer line of the Lake Superior Transit Co. Salvage operations for the valuable cargo took place on and off for over 100 years. Currents were extremely treacherous in the crash site area and prior to 1900, at least 10 divers died on the wreck.

The ingot shown here is one of the rare few that was salvaged but saved through recovery efforts in 1974 by the Busch Oceanographic Equipment Co. It remains an historic piece of copper mining history from the Upper Peninsula of Michigan. The item "Pewabic Shipwreck Copper Ingot & Ext. Rare Busch Oceanographic Book, Michigan" is in sale since Monday, April 15, 2019. This item is in the category "Collectibles\Science & Medicine (1930-Now)\Mining\Other Mining Collectibles".