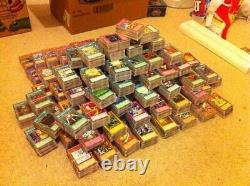 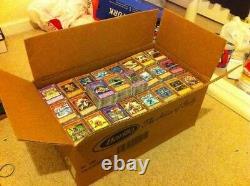 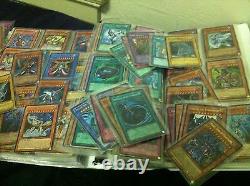 Original Yu-gi-oh 5000 Card Value Package. Condition: New, Mint, and Unplayed. Guarantee: You can get rares, uncommons, and commons, And now HOLO's + 300 Rares / Holos per order. Common (C): Common cards have no special quirks to them. No holofoil, no fancy lettering, just your standard card.

They also come in three flavors (note that there is no visual way to determine if a Common is under any of the below rarities). Normal Common : Your standard common card, and the easiest to find. Short Print Common: As the name suggests, these common cards are printed in short supply, and while more common than the other rarities, they aren't as common as your typical commons.

Super Short Print Common: Much rarer than the Short Print commons, but more rare than the other rarities. Rare (R): Rare cards are regular Common cards with their names printed in silver foil. These are the most common rarity of card to find next to Common cards. Super Rare (SR): Super Rare cards have the card art printed in a holographic foil. Ultra Rare (UR): Ultra Rare cards are a combination of Super and normal Rare cards, with foild lettering and holofoil art, except that the name is printed in gold foil instead of silver.

Secret Rare (ScR): Secret Rares (also known as Promo Rares) are the same as the Ultra Rare cards, except that the foil on the name is holographic silver, while the holofoil art is polarized, giving a cross-hatched look to it. Ultimate Rare (UtR): Similar to the Ultra Rares, except that both the art, borders, and card'buttons' (depicting the card type and, with monsters, their level) are embossed in a relief effect. These cards are generally reprints of Super and Ultra (and in the English game, normal Rare) cards of the recent sets, within those recent sets (meaning that you can sometimes get an Ultra Rare card and its Ultimate Rare counterpart in the same set).

Be careful with these cards, as their unique printing also makes them thinner and flimsier than normal cards. Parallel Rare (PR): Simply an Ultra Rare card with the same polarizing effect of a Secret Rare over the ENTIRE card. These cards are the trickiest to find, as they're only printed as certain promos, and their appearance can also be mistaken as being fake. Starfoil Rare (SFR): Starfoil Rare cards are similar to Parallel Rare cards and were introduced to TCG with Battle Pack: Epic Dawn. These cards have a sort of outer-space pattern.

The 5th card in every pack of Battle Pack: Epic Dawn is a Starfoil Card and every card in the set is available in this type. Ghost Rare (GR): Ghost Rare is a new rarity introduced in the TCG version of Tactical Evolution. It appears to have a very shiny silver lettering, much like a Secret Rare, with some colors removed from the card image, and the entire card appears to be holographic. The overall effect of these changes is a pale, "Ghost-like" appearance to the card art, especially when scanned.

When this was written, there were only four Ghost Rare TCG Cards: Rainbow Dragon, Elemental Hero Chaos Neos, Rainbow Neos and Honest. Gold Ultra Rare (GUR): Gold Ultra Rare is a new type of rarity introduced in the Gold Series. It has gold lettering and a holographic foil image like an Ultra Rare, but also has a holographic gold image border, lore text border, and card border. On Monster Cards, the Level Stars are embossed in gold foil, similar to what is found on Ultimate Rares. The item "Yugioh 5000 Cards VALUE PACKAGE LOT RANDOM BOX PACK REPACK BOOSTER COLLECTION" is in sale since Monday, February 11, 2019.